skip to main | skip to sidebar

I was on call at work today for four hours. There is a big screen television there and typically a dozen people sitting around it, so there is always awkwardness if you want to change the channel. Today featured Sylvia Browne on Montel answering peoples' questions about the future and past. This woman asked, "What can you tell me about my career in the future?" I looked up and she had the worst fe-mullet I've ever seen. I thought, come on people, make it a little difficult for her. She could have asked me, whose only psychic ability is evidenced by my prediction that Long John Silver's would declare bankruptcy (I called it about two months beforehand). I would have said to this mulleted woman, "What do you do now? Because that is what you will be doing for the rest of your life."

Speaking of bad hair, you have never seen so many scrunchies in your life outside of the check-in desk at my work.
at 6:02 PM No comments: 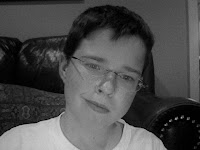 I was just fooling around with the Photo Booth function on my computer and saw 17 pictures that Patrick took of himself when I was visiting Nacogdoches for the Chili Cookoff. They were a nice surprise to see.
at 2:45 PM No comments: 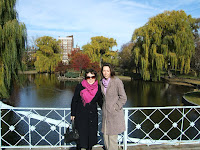 I am thankful this year that I spent Thanksgiving Day with my dear cousin Amy in Boston. We ate dinner with her friends in Cambridge (Marty, Alicia, Julie, Besserat, and Felicia) and then went to a party at the French restaurant from which she recently retired. At Petit Robert Bistro, we had yet another Thanksgiving dinner with her former coworkers and had fun drinking and dancing with French people.

All in all, a top night. I love Boston. I also love how in this picture I look like Ina Garten with a Dilbert-like skewed scarf playing grab-ass with my significantly taller cousin.
at 9:00 PM 1 comment:
Newer Posts Older Posts Home
Subscribe to: Posts (Atom)